In this episode of the Alchemist Nation Real Estate Podcast, I talk to Michael Schein, The closing Attorney, the book of the week reviewer in the 52 Wealth Principles, and also the co-host of the 100 millionaires podcast. We were joking earlier before that the podcast had run out of guests to host which isn’t the truth, in fact, there are so many people that would love to be on this podcast. The real reason why he is back is that the Alchemist Nation Real Estate Podcast is moving into the final stages of a book and the book is called The 100 Millionaires Vol.1 and I want to make sure that he is part of it. Before I get to know what he is doing apparently, I wanted how Mike got into real estate in the first place. He says that they had a start and stumbles like 10 or 15 years ago where they jumped into a property but that time it was kind of accidental because his wife’s mom was living with them and it was getting a little crowded for everybody and then the universe manifested a one-bedroom cottage down the streets two miles away which was perfect for Nana. So they snapped it up for like $160K which was a little cottage with beach rights for a lady in England who wasn’t going there anymore who sold it to them. Unfortunately, when Brenda’s mom passed away, they learned about Airbnb which they did for a whole year, and then they discovered that it would be better to rent it out, so they did and now they have an amazing tenant.

Mike Talks About Partnering With Other People

So Mike has been investing for a long time, he is great at stocks, he is great at real estate, he is even now great at crypto. He recently started writing books on partnerships and he has got a book coming out in the next few months. I wanted to know what is the one thing that drew him to partnering with people, why is he partnering with other people and why is he committed to his wife. What is it that makes him “I trust other people kind of person”? He says that he has always been nervous to do things on his own where he likes to do stuff but he would love to have someone as support as opposed to being a lone wolf, he always into connection and he is much comfortable if there is someone taking a risk with him or handling the responsibility. He and Brenda have been together for 20 years, that is why he loves her as a partner.

Delegate/Hire Someone According to Mike

Mike has made it through real estate, through partnerships, through practicing law and his law practice has grown significantly. In fact, one of the reasons Mike and I started coaching early on was to increase his income. His law practice as I recall was hitting 20 closings a month and apparently, he has hit 77 closings a month, he still makes it to our events, he is always on our podcasts every week, he is still gaining and learning and studying stocks and spending time with his family and his kids and his wife. It’s proof with partnerships, you can have that great quality of life and have a massive income and build a really great business but if you try to do things by yourself, it really takes a lot of time and you can’t grow that quickly. He says that he has an amazing partnership with his paralegals. They know that he is bringing in the closings and the generation of business but they do a lot of the administrative and a lot of stuff and with that, they have a lot of great understanding with each other and that is a great partnership as well.

He says that he would rather hire someone so that they give away the money they earn so that they have a system and that’s another credit to the 52 Books and also to the Foundational Five and Broke to a Quarter Million that are always talking about putting systems and to him money isn’t really important but the freedom and systems equal freedom to him.

Mike offers 3 pieces of advice to 20-year-old Mike on how to be successful.

Join My Mission To Build 100 Millionaires!

As many of you know, I built my wealth through Real Estate, business, sales and marketing. I’ve found this blog to be a great place to share my insights and although I don’t claim to be an expert in life, I am considered a leading expert in small multi-family investing. 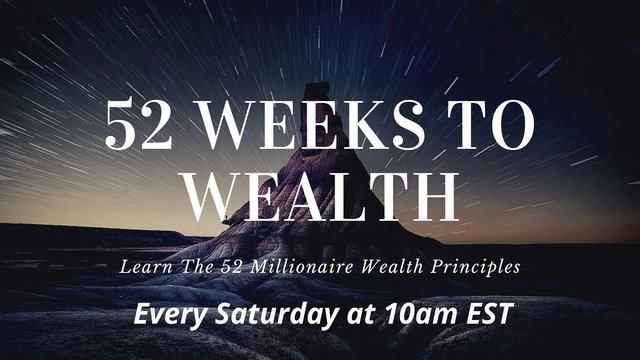 Each week I share my hard-earned insights on wealth building with anyone who will listen! I call this journey through the 52 wealth principles “The 52 Weeks To Wealth“.

PrevPreviousThe 20 Most Useless College Degrees People Still Major In?
NextSeason #2 Of The 52 Millionaire Wealth Principles #6- Your Business Must Solve a ProblemNext