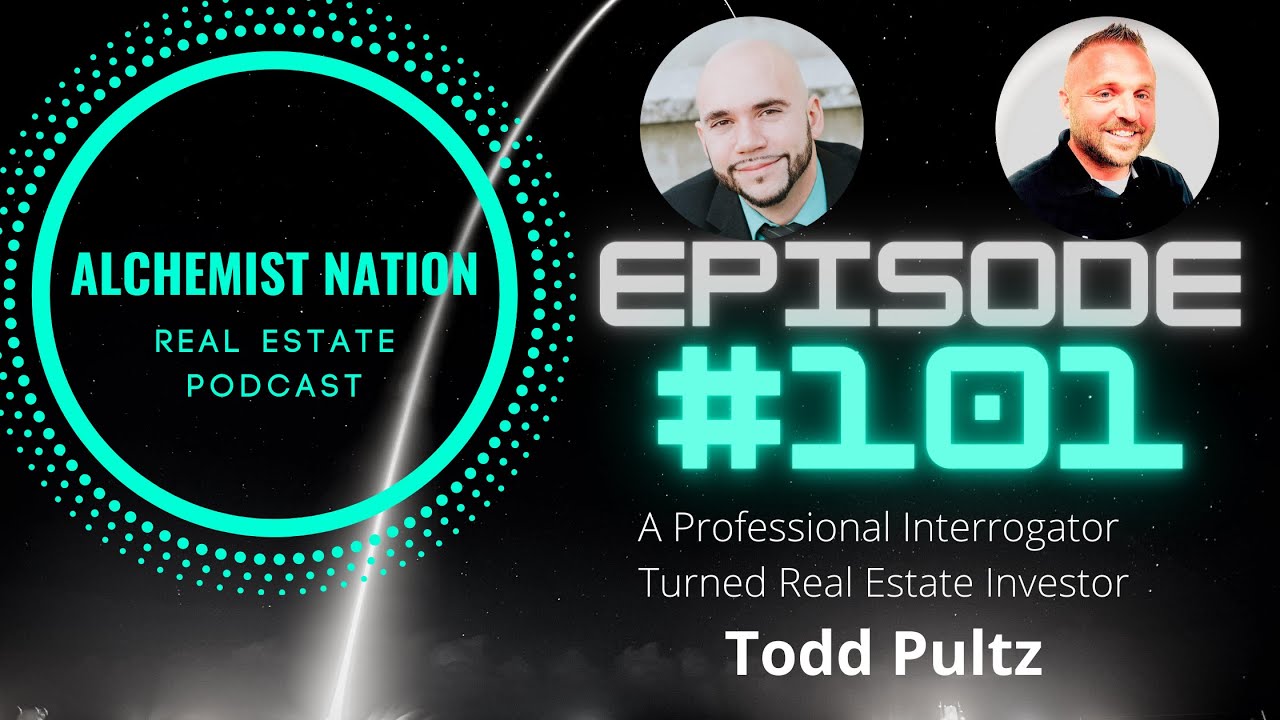 In this episode of the Alchemist Nation Real Estate Podcast, I talk to Todd Pultz who was a professional interrogator turned real estate investor. I wanted to know how Todd got into the real estate industry. He says that he wouldn’t say it was by luck but it was very intentional that he jumped into real estate. For him, it was getting his house foreclosed on, getting his car re-bought when he first met his wife and he figured out that he had sucked it where he was horrible at it. He was making good money at his salary job where he had to make a decision to live a different life and provide a different life compared to the one he was given while growing up and in 2012 he jumped on the rim and never looked back.

I ask Todd what did he do for money prior to real estate. He says that he jumped out of high school went to college, got a criminal justice degree and he became a criminal officer which he did like for 16 years. He did corp investigations for a large retail store across the country where his specialty was an interrogation, they flew him around the country where he did large internal thefts which were all law enforcement, and nothing ever surrounded real estate prior to that.

I further ask Todd what made him realize that job he was doing wasn’t working out for him even though it was a nice paying job that forced him to a real estate transition. He says that before he met his wife, they were just starting a new relationship when everything started going down. He knew that he wasn’t good with money before then and he grew up very poor in Delaware, Ohio. His parents didn’t have much, his mum didn’t work, she stopped at 8th grade in school and his dad got fired from job to job. He didn’t have those life skills while growing up and for a long time he blamed his parents and he was mad at them for long time. Eventually, when he got at that moment when his house was foreclosed, his car re-bought from the driveway of his new relationship, it is at this moment when he said to himself to quit blaming his past, quit blaming his childhood and anybody in this world can do anything they want. For him, he was like he has to hold himself accountable, he had to do something for himself and if he wanted to change, he had to make change happen by himself because nobody was going to pick him up. He insists that he had the money to pay the bills though he didn’t just do it where he just lived beyond his means that the time.

I wanted to know how long Todd has been in real estate, when did he start and what year was it. He says that he started at the end of 2012 and that is when he bought his first property. His very first real estate property was a quad and was fully occupied on paper and they bought it for $21K cash. It was one of his favorite deals and it is the property that kept given, he sold that property two years ago.

I hear that in Ohio, Cleveland, Columbus, Dayton when it comes to cheap and small multifamilies where a buddy of mine has picked up a 600 unit old Rockefeller building in Cleveland. I wanted to know what draws investors to it. He says that the price of inventory is still low in Ohio and they have a large base of multifamily that you can get started with. If you’re to jump in Ohio right now, you’ll have Cincinnati, Columbus, Cleveland as your primary markets. He sees a lot of appreciation in Columbus and it is off the charts and he tries to stay away from the primary markets as for him, he is focusing on Dayton. If you focus on secondary markets like Dayton and smaller secondary markets like Akron, Kenton you can still have great success.

Todd offers 3 pieces of advice to 20-year-old Todd on how to get to where he is happier and more successful.
1) – Be good and kind to people and always play the giver’s game.
2) – Educate yourself more to avoid pitfalls and reach out to mentors.
3) – Network because it is huge in the real estate business.