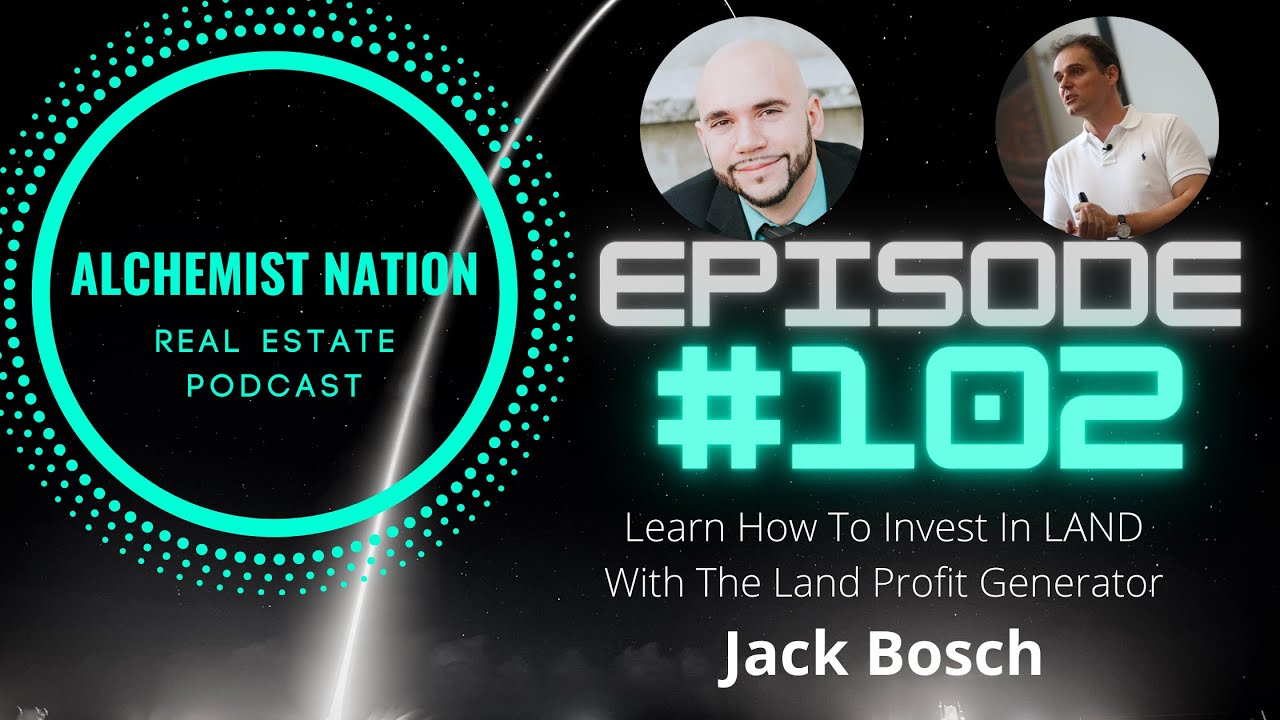 In this episode of the Alchemist Nation Real Estate Podcast, I talk to Jack Bosch one of the experts when it comes to selling, purchasing, and flipping land itself. Jack says that they bring people to being masters of landing flipping, so they’re the land masters. They brand themselves as the land profit generator fund and they happened to be in the business for 18 years. They flip land as house flippers flip houses without the number one complicating factor of house flipping which is the house. He is not saying that house flipping is bad, he has flipped a few dozen of houses but you’re dealing with so much complexity when flipping houses because you have to get in first of all or you if you’re to do it virtually, still you must have somebody go into the house, you have to have someone estimate repairs, you dealing with a lot of competition and time frames because that person needs to sell it like in seven days. You’re dealing with hard money and all that kind of stuff. With landing flipping, they’re not dealing with any of them but they can do the same thing where he is actually helping one of their students through a deal that the following week, he will make 30,000 on the deal without having ever seen the property. He actually lives outside of the country, hasn’t been in the country in 2020 yet he has multiple deals on the contract, one is closing the coming week, one is putting on the contract like today for sale and together, these deals would make roughly like $50,000 from overseas.

I wanted to know how Jack got started in real estate. He says that he came to the US to finish his college degree and got a one year masters degree because he had an undergraduate in the same thing basically MBA where he realized how wonderful the country was and after 3 weeks, he met an awesome girl and moving fast forward, she is now his wife for nineteen years and they have a thirteen-year-old daughter. Closer to graduation, they didn’t want to leave the States, they wanted to give their relationship a chance because his wife is an immigrant from Honduras. To cut the story short, they got jobs, the companies sponsored their work visas which led to the green card that led them to ultimately become citizens. Though somewhere in that process of having a job, they realized that’s not what is meant to be like he got internally lazy. He says that he was willing to work really hard for a short period of time in order to be lazy for a long period of time. What he can’t stand was a daily grind that has no chance of ending for 40 years which is a definition of the job. When he got a job, he was like he didn’t want to be there, so they kind of looked around and came across a lot of stuff, one of them being real estate that caught on and made sense too. What Jack loves about real estate because it fulfills the four criteria that you’re looking for in any business.1) It is designed to make money 2) If you do it in the right way, it provides cash flow 3) If you do it right, you don’t even have to be there. 4)Doing it part-time, you don’t have to do it full-time. You can do it virtually or even travel as the deals are happening. After figuring out that real estate was the right tool, you can do multifamily, single-family, commercial, rehabbing, wholesaling, building from the ground up, land banking or developing, land flipping. They tried a few of those and they failed in method after method because they had no money, no credit, no relationships, no knowledge but once they hit landing flipping, boom they were millionaires after 18 months.

I ask Jack what inspired him to say that they’re making 1000 millionaires in 2 years. He says what inspired them was when you reach your personal goals financially, something interesting happens, you almost fall in a hole because you’re always like when I accomplish that, I’m going to be happy and this is fantastic, you always want to set for yourself goals, you always want goals that stretch you, that make you better. Once they accomplished their goals at the time when their daughter was born, they had the baby, the car, the money in the bank but they were like what were they going to do by then because they were like 5 people that did land flipping in the country and they realized that they don’t create any competition by teaching land flipping. They thought of the impact it will have on the people and their families.

Jack offers 3 pieces of advice to 20-year-old Jack that are most powerful to him.
1) – Never think that you’re too young.
2) – Just Go for it.
3) – Surround yourself with people that are going somewhere.

To register for our Saturday live webinar to start your wealth journey, visit: http://www.gualteramarelo.com/Live

To get in touch with Jack, visit https://www.landprofitgenerator.com/