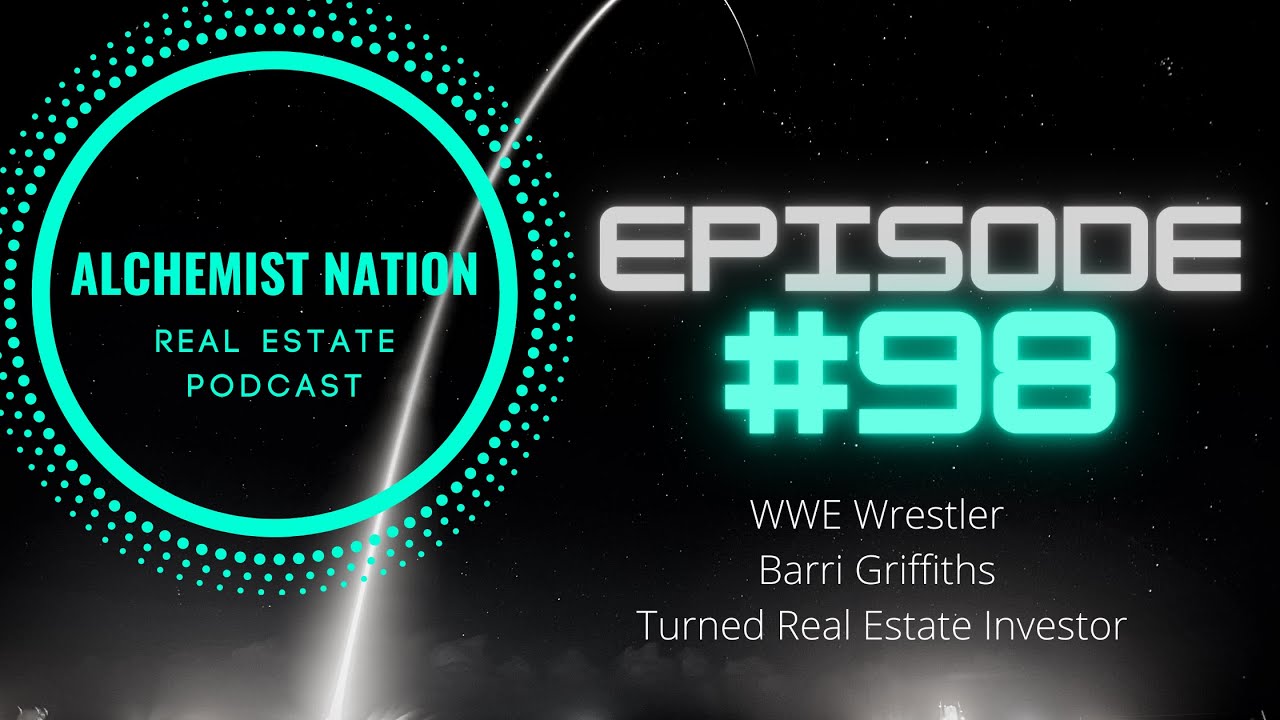 In this episode of the Alchemist Nation Real Estate Podcast, I talk to a former professional wrestler in Tampa, FL, Barri Griffiths. I wanted to know how Barri got into wrestling before he tells the Alchemist Nation Podcast Audience how he got into real estate. He says how he got into wrestling is kind of different from other people where those people grew up watching their dreams of being a wrestler. They only had four TV channels at the time when he was growing up, so it was not that they were necessary poor but they were really poor, behind the times not that many people had cable tv at the time and that’s how he grew up where he wasn’t exposed to wrestling while growing up. He was a sports person while growing up where he started weight lifting and fell in love with it. He was doing it all the time where he stopped drinking, stopped going out, stopped doing a lot of other stuff, and focused only on weight lifting because he loved it, he really enjoyed it whereby on a Saturday night he would be in the gym well as everyone else was being hammered or getting high in the pub. After a while, he built a physique for himself, he was training, dieting, doing all the necessary stuff but still working a regular job. He didn’t want to be a bodybuilder, so one day he switched on the TV where he saw these huge jack guys on TV being Athletic and he knew it was wrestling. He lived in a tiny town of like 200 people that had his dad’s company, a post office, a restaurant, and 3 pubs. He didn’t have any idea of where to go and wrestling wasn’t what it is in the US, it was slightly unrespected because of the fake fighting well as other people were like wrestling is cool and they loved it. So locker show came to his town, it was a tiny little show where he met the promoter who was as old school, who had promoted wrestling for the last 50 years and he talked to him, saw the physique, saw that he was interested and started training him. He started wrestling with him all over the UK, got signed to WWE, and moved to Tampa, Florida.

I ask Barri what made him try real estate investing in Las Vegas. He says that he was in Tampa, FL, living the life wrestling, been on TV, and all other cool stuff like the big names, John Cena, Kane. He did that for four years and towards the end of his time, though he never knew it was his end time, he ended up buying a house that wasn’t purchased in terms of investment. He just liked the color of the walls, flooring, the Kitchen, he was an emotional buyer since it was a primary residence that he wanted to live in, didn’t do any analysis in terms of if he needed to rent it out, his mortgage payment plans though it ended up being $ 2,550 a month mortgage payment which was no joke even though he was making good money with the WWE. To be honest with himself, he didn’t understand finances at the time, he was frugal and kind of smart with his money. He thought working with WWE would make him a millionaire where he had Plans A, B, C which were all to become the world’s heavyweight champion. He narrates how he bought the house in January 2014 for $ 435,000 and in April of that year, WWE didn’t renew his contract. He needed to find a way to get hold of his property which was mentally too hard for him to sell. With down the rabbit hole of finding a renter, screening a renter, and all the rent laws and he finally got a renter. This sat him down the rabbit hole of real estate investing where he is even not sure if he found Rich Dad Poor Dad on Bigger pockets but what he remembers the journey to real estate investing started from there.

I further ask Barri what kind of rentals is he buying, is he buying multifamily or single-family? And where is the buying or investing, Las Vegas or across the country? After selling his 3 properties that had gone up in value, now he is focussing on multifamily and he now owns 6 units in Cincinnati, Ohio, living in Las Vegas.

Barri offers 4 pieces of Advice to 20-year-old Barri on how to live a better abundant life faster and get what he wants quicker.
1) – Figure out your goal, what you’re trying to achieve.
2) – Find Partners, Don’t be afraid to partner.
3) – Don’t wait by trying and timing the market.
4) – Get your finances in order.

To get in touch with Barri, visit https://www.wrestlingwithrealestate.com/

To listen to my podcast episode on Wrestling with Real Estate, follow the link below ?
https://www.wrestlingwithrealestate.com/wwrepodcast/episode/f12d8a93/broke-to-a-quarter-million-or-gualter-amarelo-vs-barri-griffiths-podcast081