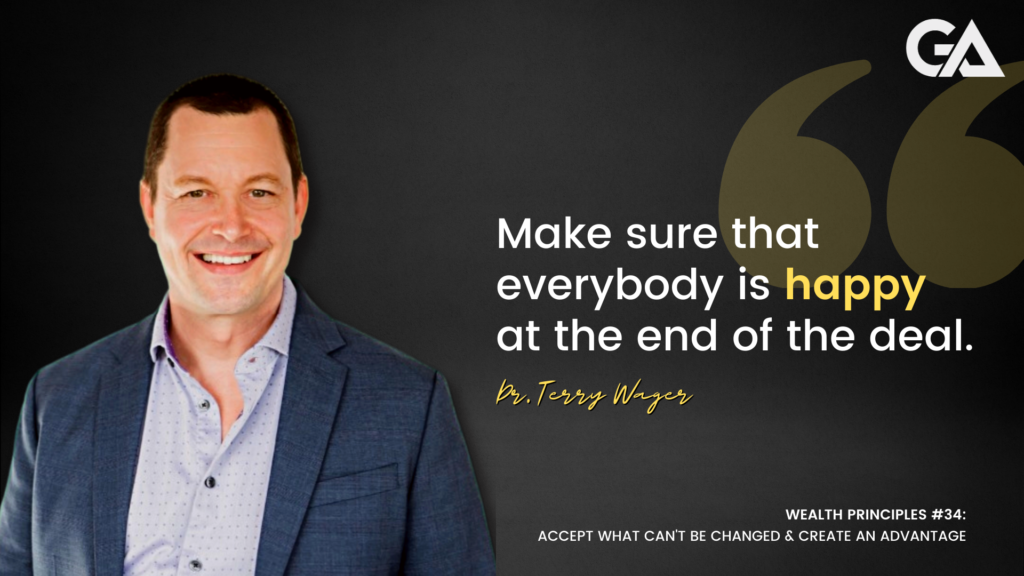 Let’s go to the bullet train of action, Dr. Terry wager, what is your take on wealth principle 34, simply can’t be changed and create an advantage.

*** The thing I think about with negotiation, where I see most people fail is clarity, they don’t have clarity and what they want, they don’t have a reason for why they want it. And so when they get into negotiations, they get squishy, and they start to lose their footing. It reminds me of a lake down the road from us. And there’s a marine that allows boats in there. And years ago, I was out there at night, standing there, and I saw this boat, like sitting really low in the water.

And well, we stepped on it and it started sinking. And then it kind of went to the bottom, whoops. The reason the boat sank is that the whole ship itself was compromised. And so if you think about it, when you compromise yourself, you’re doing the same thing, you’re putting a split in yourself, that allows you to start sinking, sometimes slowly, sometimes very quickly.

But if we compromise, we sink. And so what I think about whenever I go into negotiation is what is the ultimate outcome, // I get really clear on what I want, why I want it. And then I get really clear on helping them get what they want. Because when we’re talking about negotiation, we’re talking about really making sure that everybody is happy at the end of the deal.

And everybody has a win-win. Otherwise, it’s not a real great negotiation. And so understanding what we can do, to get really clear on what we want and what they want. And when we have that everybody walks away from that deal, excited about what they got focused on what’s forward, and there is no buyer’s remorse in it. And so clarity is the real key when you start to negotiate.

Let’s give Dr. Terry a round of applause. Clarity is power in negotiations: know what you want and know what you’d be willing to compromise on in advance.

Register You Spot At The

And one of the things that’s really important is also for clarity is knowing your bottom line, like knowing when you’re gonna walk like just have so much certainty because if you’re not clear about that like you be clear about the outcome of your desired outcome, and that’s tantamount.

But if you don’t know where you’re going to walk, you’re also in a new conversation because you could slowly be eked away and go past and then you could at the moment, be excited, but then realize, “Oh, wait a minute, that wasn’t what, right? Because if you’re like I gotta get the deal at any cost and then sacrifice.” But that clarity is power, negotiation is about communication. It’s about connecting with people.

Communication, and understanding people’s needs. And what they want is some of the best skills to bring into any negotiation, which gives you the ability to do what you were talking about earlier with your tonality and all of that you get to connect with people where they’re at. And that’s all I’ve got to say about that.

Let’s give Doug McGurk a round of applause.

What I want to stress is the importance of this, like in terms of what you work on. I mean, if you have a list of things you want to work on, push us to the top. Because when it comes to negotiating, it’s one of those things that you immediately see tangible results with the improvement of your ability. So, you know, focus on tonality and ask for what you want.

And he basically asked for what he would accept and I was like, why did you drop it? Like why don’t you ask for more? And if he says no, then you. The second thing is this, you know what? And then you end up where you want to be anyway, but why not take a shot at getting more so now you know you’re getting paid a better wage overall for each job. So ask for what you want.

To Know What The Heck Bitcoin Is?

Gualter only because it organically played out so well. We’re speaking about asking for what you want. So since I work so hard to get it out. I want people that want to learn about crypto to go to Amazon and buy this book. Because it just came out this morning.

What’s up, party people? When I first learned about negotiating, I thought you had to be such a hardass. Like, like that’s the hard-line like what’s your bottom line like, go in and you know and be like super strong and but as I started learning more about the art of influence, I realized that the best thing that we can do, the best analogy I can give is like being like water.

It also understands what it’s dealing with where it takes many forms, it knows when it needs to be solid, or hard. It knows when it needs to be misty or soft. And it understands it can take it’s shapeshifter, but it never loses sight of what it really is. And so the most like Doug had said earlier to the most flexible wins, and there’s nothing more flexible than water. You know. So if we think about the number one principle of water, it’s relentless.

It never ceases, it never stops, but it is super flexible, and how it and how it rolls. And so I think that if we can be like water more often, what’s the end result, water is either going to help you grow, it nourishes, or it helps you grow. So either at the end of it, you’re gonna learn something or you’re gonna get something. But it’s relentless, but it’s malleable. And it can be whatever it needs to be to get where it wants to go.

Let’s give Heidi a round of applause. And for anybody who doesn’t know Heidi will be a speaker at the event at the 100 millionaires summit coming up in October. Hence the camera if you know you’re going to be in the room with us take action building your business plan and connecting with the right people. Give yourselves a round of applause success when people show up. Successful people make quick decisions, they take action. And they stick to them permanently. They only change when there’s enough information that says maybe they should.

Register You Spot At The

Mike Schein, You’re Up Next

I will say for me that what has changed since I met Gualter and read all these books is I am focusing on Creative versus competitive. And that is super important in my life, too. You know, because it used to be ego and you got to win. And a lot of times people don’t even care about the outcome, they just want to win.

That happens a lot in closings, you know there’s something silly going on where people are fighting over things like how much oil is in the oil tank for production. And it’s like nobody really cares about the $200 they’re just they want to win. And what I found is that if you take a step back and you’re just creating something that works for everyone, things go much smoother and there’s no contention so I’m usually the first person to throw my ego out the window and say fine if you really want to win this argument fine, you can win it but what I want to do is get everybody happy.

You know I want the seller to close, the buyer to close, and the realtors get paid, everybody gets paid. So with that, more of a vision of how we can create something that works for everyone and put the ego outside the closing room that’s been something that’s been really valuable for me.

Oftentimes when we think outside the box and that flexibility and creativity we can bring things into the negotiation that to the other side is high value, but us is not really a big deal. So we’re looking at okay wait so we’ve really done some needs assessment really connected with the other person we may understand what they really like, what they’re really going for and be able to do stuff that is really no skin off our nose at all.

But to them it’s huge and it’s it could be and this is where when you know when friends and influence people like that thought of like what you can bring in like naming the street after you or you know these other little things outside the box they go “oh yeah oh you’re gonna do that” and it puts you over the edge and it moves the needle and that’s where that creativity comes in so sorry sorry to jump in Mike but that was that just inspired like you know, practical application to what you shared cuz I was brilliant.

Awesome. I love that. Coaches working off each other.

Yes, it’s one of my favorite books, never split the difference. I read it probably four times. And I’m, I’ve used it practically in negotiations. And the biggest takeaway today from me is asking those three questions.

And then it goes deeper into like, What’s the real legacy you are going after or want to leave behind? And what’s the real trigger?

So all these y’s help you to paint the picture for that person in front of you of what’s going to happen after a negotiation is over. And I think that painting while listening to the whys really gets into the bottom line of that person and painting that picture for them really helps you to close the deal as a win-win. Because we all visualize whether we hear, visualize the smell and the afterlife, we visualize how we feel when we get the deal down.

And if you can nail it, that person will soften and you will get what you both want. So start with why really get to what they won’t don’t stop after first Why go after the third and fourth? and then once you’ve figured it out what the what is really important to that person in front of you you can paint that picture and I know well you sent us to use that to buy some ways which were real, and she told me I wish she painted the picture for the salary the person will really trust you in that situation. They were not okay. They get me then to stand me. Okay, it’s like moving that needle-like that’s it. So that’s my biggest takeaway and it helped me in the past. Hopefully, that will help you.

The 100 Millionaires Summit Is Coming Up!

We’ve already sold out the general seating tickets and seats are being bought up fast for the VIP tickets!

If you are serious about scaling your real estate portfolio and want to discover what do to now that you have purchased and stabilized your first few properties. This is the event you have to be at!

We will be talking about scaling to 50 units, how to get that $10k in passive income monthly as well as how to find the right partners and the future of the real estate market!

Everything you need to scale your portfolio and prepare yourself to hit your goals all in an intensive 3 day event that will be filled with like minded people who might be looking to partner up with you on the next deal!

Register to reserve your seat today at: www.iBuildMillionaires.com/SUMMIT

There is plenty of room at the top! I will see you at the SUMMIT!