If hard work made you rich, everyone with a 9-5 would be millionaires 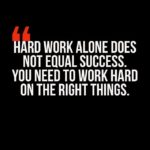 My First Lesson In “Hard Work”

I grew up being told that you have to work hard to make money. The harder you work, the more you will get paid, Getting rich is hard work. It’s no wonder that the first 10 years of my working life I focused on “hard work”!

In fact, I bought into this philosophy so much that I would actually look for HARDER and HARDER jobs! In my first career, I started on the sales floor of a flooring company, until I discovered the warehouse and eventually graduated to installing tile and wood flooring as a side hustle.

The whole time I was following this path my brother started in the same role on the sales floor, but instead of following “hard work” he followed his passion, which was to be an architect. As a result, he moved into the drafting department and learned skills like AutoCAD and other specialized skills. This later lead him to a position with a large company designing luxury kitchens.

That was the first time I was exposed to the lesson of following your passion and I wish I could say I was smart enough to notice it then, but alas, my gift was hard work, not meaningful work or at least that was my long term belief system.

Did I Ever Learn The Lesson?

Fast forward to my venture into real estate investing and finally getting a taste for “REAL MONEY”. I started with a move in flip where I did all the work just to break even 4 years later. It wasn’t until my 3rd property that I finally started hiring other people to do the “hard work” while positioning myself as the investor.

I’ve been investing in Real Estate since 2008, but it wasn’t until 2015 that I began to embrace the idea of paying other people to do the work. In 2017 I finally decided to take on a partner and in that first year together we purchased more real estate than I had acquired in my first 9 years!

Since then we have gone on to build multiple businesses together, have a $10MM real estate portfolio and are building a highly impactful training company that focuses on expanding our networking with highly motivated, talented, skilled and high net-worth individuals who have access to deals, capital and contractors.

As an investor we have 1 singular highest and best use and that is connecting with the right people. This is the task that when done properly can launch you into extraordinary income earning potential!

How Does it Work?

It starts with thinking bigger and having goals that force you to consider bringing in help. When it comes to flipping a house in 4 years, sure you can do it yourself. BUT if your goal is to fully renovate a property in 6-8 weeks you are going to need a crew.

Even further as you continue to realize the power of a strong network and management skills you become aware that finding deals requires surrounding yourself with very specialized deal finders like Agents and Wholesalers. In order to raise capital you also require a strong network of high net-worth individuals.

All of this networking and managing takes time and if you are going to grow a successful real investing business you are going to have to set aside time to attract more deals and raise capital to take these deals down along with tracking and recruiting better quality contractors.

What is the Solution For Someone Who Can’t Shake The “Work Hard” Mentality?

I can’t promise this process will work for you, but it has been the most effect strategy for getting myself out of the “Do It Yourself” death-trap!

Step 2 – Choose a timeline no longer than 3 years. If you have already earned a million before, then you may reduce the timeline accordingly to something lower. I have actually been able to reduce this number down to 3-6 months and have friends who are working on cutting it down to a single month!

Step 3 – Work backwards. What I mean by this is find out how many deals it would take to reach this goal and what size those deals will have to be. For example if your average deal profits $50k you will require 20 of these over the 3 years. (Be aware that the first year, my be slower than the third year. In fact, you will likely complete more deals in year 3 than the first 2 years combined)

Step 4 – Remind yourself that there is ALWAYS someone who can do the work better than you. If you haven’t found them, then it is time to get back to your singular most valuable activity. (Remember, this is reaching out and building your network)

You have a limited time on this planet and a limited amount of energy with which you can take on activities that will either grow you or slow you. Focus on a large goal to accomplish and seek out or attract the right people to help you achieve this goal.

I am focused on bringing back the middle-class, which means helping more people to become millionaires. Millionaires in many cases still have to work on some level, but they are able to do work that they enjoy and they are setup with a retirement plan that continues to increase income as they improve their assets and pay down any debt used to acquire them.

I am currently offer the chance to mentor 100 people who want to become Millionaires. This mission to build 100 millionaires came to me as a fun challenge to take on and it has continued to stretch my ability to find highly motivated people who are willing to take the RIGHT ACTION!

I am having a recruiting event called the 100 Millionaires Summit! If you know someone who has said they want to become a millionaire this event may be for them. The registration link is below. I have teamed up with 9 other millionaires to deliver the training, strategies and the practical actions steps to make this possible for all attendees.

Remember, there is plenty of room at the top! I will see you at the SUMMIT!

Register Here if you believe you have what it takes: www.iBuildMillionaires.com/SUMMIT

As Always, Cheers To Your Success!

PrevPreviousSeason #2 of 52 Millionaire Wealth Principles #3 – Understand the 4 Types of Money.
NextWhat Makes A Billionaire So Damn Successful? It’s This One Thing…Next