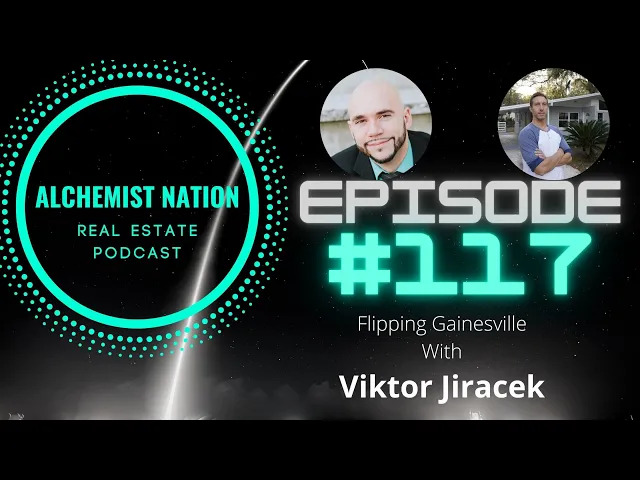 In this episode of the Alchemist Nation Real Estate Podcast, I talk to Viktor Jiracek who did 20 flips in 2020 and is aiming at more in 2021. I wanted to know what is the mindset of someone who has been successful and who says that he is going to add an extra 10 flips to his entire portfolio when the average person is afraid to do their own flip, In fact, an average person is afraid to buy their own house and I also wanted how he got into this. He says that he did 20 flips last year and his goal is to do 30 flips this year and how he got into real estate is that luckily real estate has been a family business which he kind of got brought up with it. He was 14 when he got started and he could help out with family properties like smaller renovation tasks like doing demos, riping out a carpet, painting which was super simple stuff and he really grew up with it and bought his first property like his own rental when he was 18 years which was a little condo. He was more rebellious and he always wanted to do something else and was always entrepreneurial rather than real estate since it was a family thing. He had a couple of failed businesses but he realized real estate was fun, lucrative, and he even had a passion for it and he felt that he was always tied into it, so he is back into real estate and is really enjoying it.

How Viktor Was Able Paid Off All His Credit Card Debts.

Victor instead of buying a business, he bought a job using credit. I wanted to know how he paid all that credit card debt on the job he bought. He says basically what happened to the home health [job] which fell apart and he didn’t get a deal which he had been doing for so long and some of the SBA rules had changed which made things harder. So he let things pass and he started working for a home health company as a home health administrator for a while where he was helping in the running of the agency. It is from there where he transitioned to real estate because he had the passion and the drive and there was something in the back of his mind for all those years where the end goal was to make all the money and put it in real estate. So he basically got into wholesaling and flipping and with the flips and the success he had with the real estate, he was able to pay off those credit card debts which were like a year or two years ago. He is now living bad debt-free and he is using hard money to get deals, mortgages to rentals not bad debt like credit card debt, people he owes that don’t generate income.

This Is What Viktor Discovered When He Was In Debt.

He figured something when he was in debt where he had to owe people and he was trying to get out of it and he prefers a $ 30K Check than $ 300 a month and please don’t get him wrong because to where he was by then and still where he is right now, he would rather get a $ 30K check which he can slow translate into passive income in the future. This is a natural flow of things for people getting started, he would recommend like for your first deal, do a flip because you’re going to have that in and out, you’re going to get a big check because that is life-changing money 20K – 40K for an average person. The second reason as to why you should get into flip is that you going to make mistakes which totally fine. You’d rather make mistakes in the property and move on versus being stuck with that property for a long term like 3 – 7 years plus.

That One Thing Viktor Is Putting Energy Into Right Now.

I asked Viktor what is the one thing is doing right now that he sees putting all his energy into. He says that he is sticking to the fundamentals like the numbers have to make sense, still getting out there, putting out offers on deals. He knows that Covid-19 has changed some things in the real estate landscape but the basics still remain the same, a house is a house with four walls and a roof.

Viktor offers 3 pieces of advice to 17-year-old Viktor that would explode his success and get to where he is faster.
1) – Mindset
2) – Mindset
3) – Mindset

To register for our Saturday live webinar to start your wealth journey, visit: http://www.ibuildmillionaires.com

To get in touch with Viktor, connect with him on Facebook @viktor.jiracek.5 or visit his Facebook Group https://www.facebook.com/groups/sixfigureflippers/