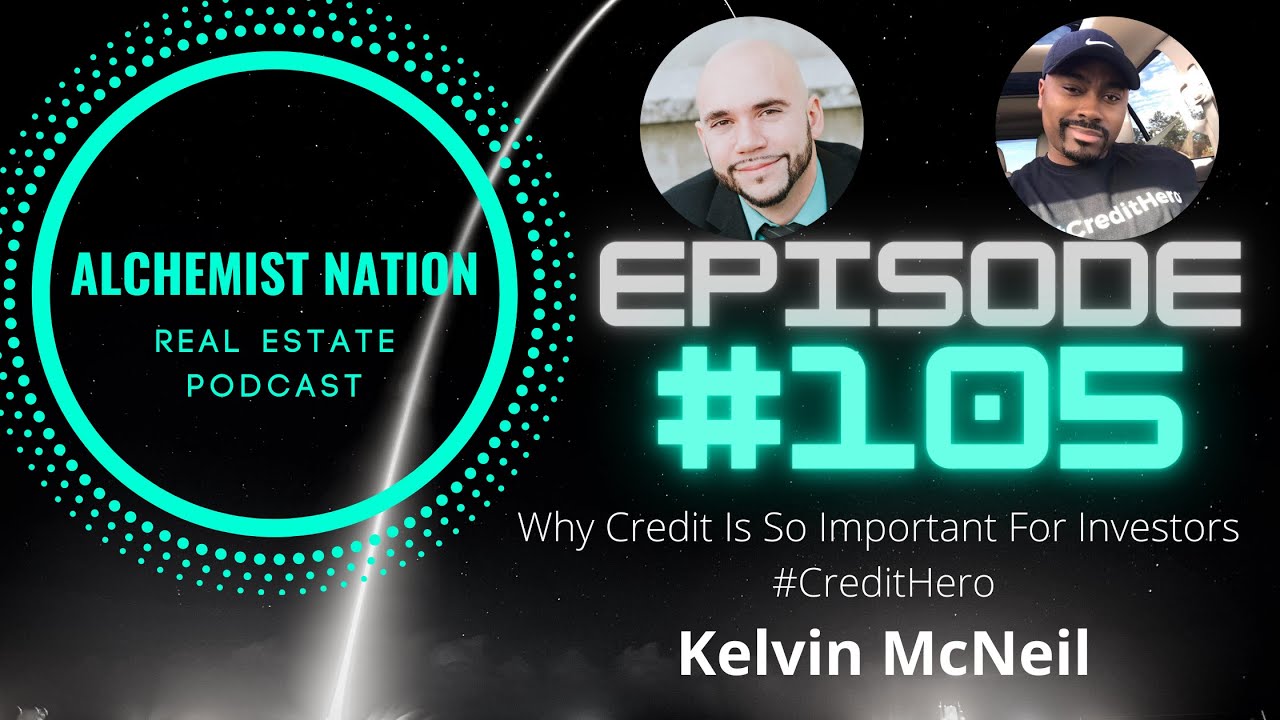 In this episode of the Alchemist Nation Real Estate still, on credit repair, I talk to Kevin McNeil of Green Scale Credit. The reason why I brought him and Eric Counts on this podcast is that there have been a lot of people that I have been giving the basic advice I believe in. One of the things that come out often is that should I have my credit fixed or I need my credit fixed to do real estate. Although the answer is that you don’t have to, you will have to pay a lot of interest if you don’t put your credit together. In real estate, the debt gets way bigger and banks rely on credit because you have to be a trusty worth person who actually can pay his/her bills, do what you say that you’re going to do, and for a certain period of time, the person has been consistent. So I wanted to know how Kelvin got into credit repair. He says that in his early 20s, he had terrible credit where his scores were in the 400s – 500s range just like most people when they turn 18 years, there is a credit card. He literally knew nothing about credit and he never knew that it could last seven years on his credit report. When he became an adult, he couldn’t even get a car without a co-signer which inspired him into how he could figure out how to fix that. To cut the long story short, he did all the research, did all the courses, and is now a certified credit repair consultant. That is how he got into the credit repair industry where he started his business and is essentially wanted to help as many people as possible to do what he did for himself except that it took him years though he is able to help people in a few months.

I wanted to know what is the story behind or what are they typically saying when someone wants his/her credit checked with Green Scale Credit. He says that he typically deals with first-time homebuyers or people that unfortunately got hard times during Covid19 which means they’re trying to purchase a new home or they trying to be where they were before the pandemic. People that have their medical bills, derogatory items that they need to be removed which are holding down the typical average American, whether the student loans, late payments, medical bills, charged up credit cards which are all derogatory items and also knowing the credit balance.

Revolving credit lines, I wanted to know what is the suggested amount that one should have out there. He suggests that one should have a minimum of three with the letters he works with for example require at least 3, the minimum can be 2 but that is a little stretch. He always says three revolver lines of credit and making sure that they have low balances. Another thing is to start early and you shouldn’t look at a credit card as a negative thing but as a tool for building credit. If you relay on the ball and you’ve just started getting revolver accounts then they’re too new, the lenders won’t lend to you because you’ve average lines of credit that are at least a year or maybe two years old.

I have got 26 lines of credit and I use those as a way to leverage different assets. The biggest thing that I have found is that if I don’t use one of them, I do lose it/drop the limits and if you overuse it, they will drop the limits. I ask Kelvin what should he suggest people use their cards for each month. He says that If you have a card that you’re not using, simply buy gas, buy lunch once a month which can be a golden standard, especially when you have several lines of credit and this can be a strategy you can use to increase your credit. Make sure you pay the full balance amount before statement day which is going to intensify them to give up a higher credit limit especially when they see you’re making early payments. If you have a card that has a balance and you’re making payments or making purchases, make sure you’re not just making the minimum balance because that is like the death sentence.

Going back to mortgages, I wanted to know how a mortgage can affect your credit score. He says that it affects you in a negative way when you try to go and get more funding for anybody who is going the traditional route when trying to purchase a real estate investment property. You need to start building business credit even though there is other people’s money [OPM] and you need to use a different tool that is going to separate you from the debt.

Kelvin offers 3 pieces of advice to 20-year-old Kelvin to get his credit lined up and move his life in the right direction.
1) – Read more and invest more in financial literature.
2) – If it doesn’t pay you then it isn’t an asset or if it isn’t a stream of income then it isn’t an asset.
3) – Start a business sooner.